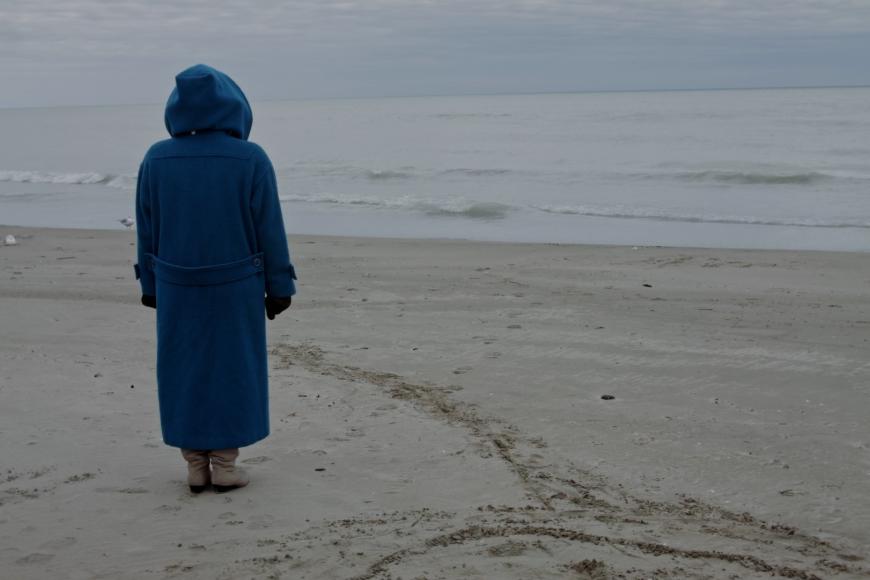 The film programme of our 65th edition is complete! We will present a total of 255 films and extended reality (XR) experiences from 55 countries. Tickets are now available. 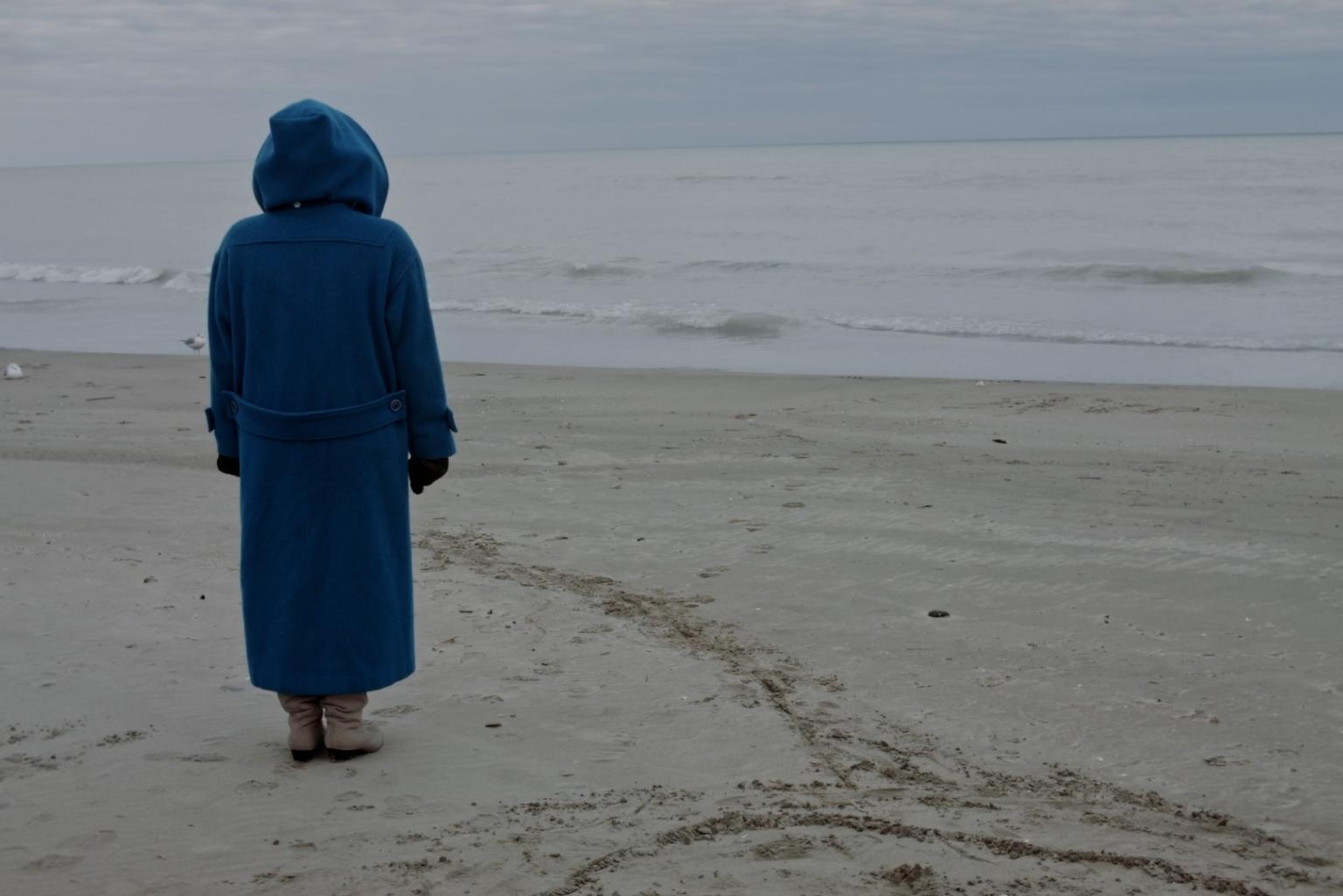 The film programme of DOK Leipzig’s 65th edition is complete! 74 short and long animated and documentary films compete for the Golden and Silver Doves this year, 48 of which are being screened in Leipzig as international or world premieres.

The International Competitions, The German Competitions and the Competitions for the Audience Awards are showcasing numerous works from the documentary film sector. These include films by first-time directors as well as works by multiple award-winning filmmakers like Sasha Kulak, Mila Turajlić und Nikolaus Geyrhalter. The range of form extends from observational style to performative dramatisations to the creative appropriation of archived images. Animated films also have a strong presence in this year’s programme, with imaginative, humorous and experimental works competing in the short film competitions.

Several films tell family histories or biographical stories in the context of social institutions. “The Dependents” by Sofía Brockenshire combines a portrait of her father, a well-travelled Canadian immigration official, with reflections on borders, privileges and dependencies. In “The Invisible Frontier”, Mariana Flores Villalba films Mexican military exercises on a deserted island in the Pacific. Tilman König films his father, a former youth pastor from Jena whose stance against the far right was a source of controversy (“Pastor Lothar Stops”).

In the German Competitions, short and long films deal with the consequences of opposing the GDR, among others. Several films reflect debates on authorship and truth as these relate to the creation of digital images.

“The films at this year’s festival confront us with genuine social realities, but they also teach us that documentary images must be approached with scepticism,” says festival director Christoph Terhechte. “At a time when deep fakes are circulating online, DOK Leipzig regards itself as a platform that enables a critical discussion of the way images are being created and the forms of truth that are resulting from this.”

Ticket sales have started – including for the new festival venue in Connewitz!

We will present a total of 255 films and extended reality (XR) experiences from 55 countries, including 67 feature films and 179 short films. The venerable Kinobar Prager Frühling theatre will be joining us as a new festival cinema in the southern part of town.

With the publication of the programme of films, including all screening times, ticket sales for the 65th festival edition have started. The festival will also be screening some of the films free of charge in the East Hall of Leipzig Central Station and at the Polish Institute. In accordance with the current Coronavirus Protection Ordinance, we are currently not imposing any restrictions on access to the festival events. However, it is strongly recommended that you wear a mask covering your nose and mouth at all times while in the venues. 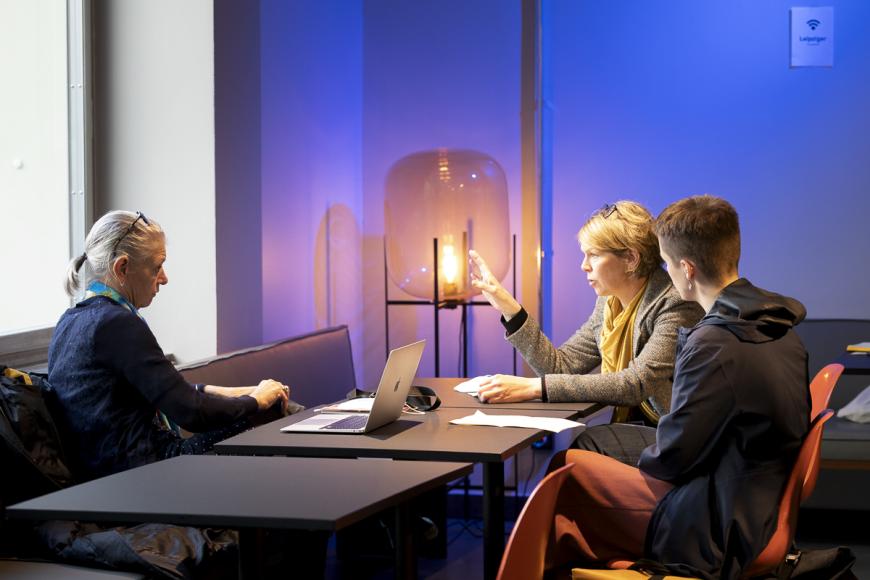 We proudly present: Our industry events take place in Leipzig during the first five days of the festival week (17 to 21 October) – along with livestreams and recordings for all those who can't be there on site. 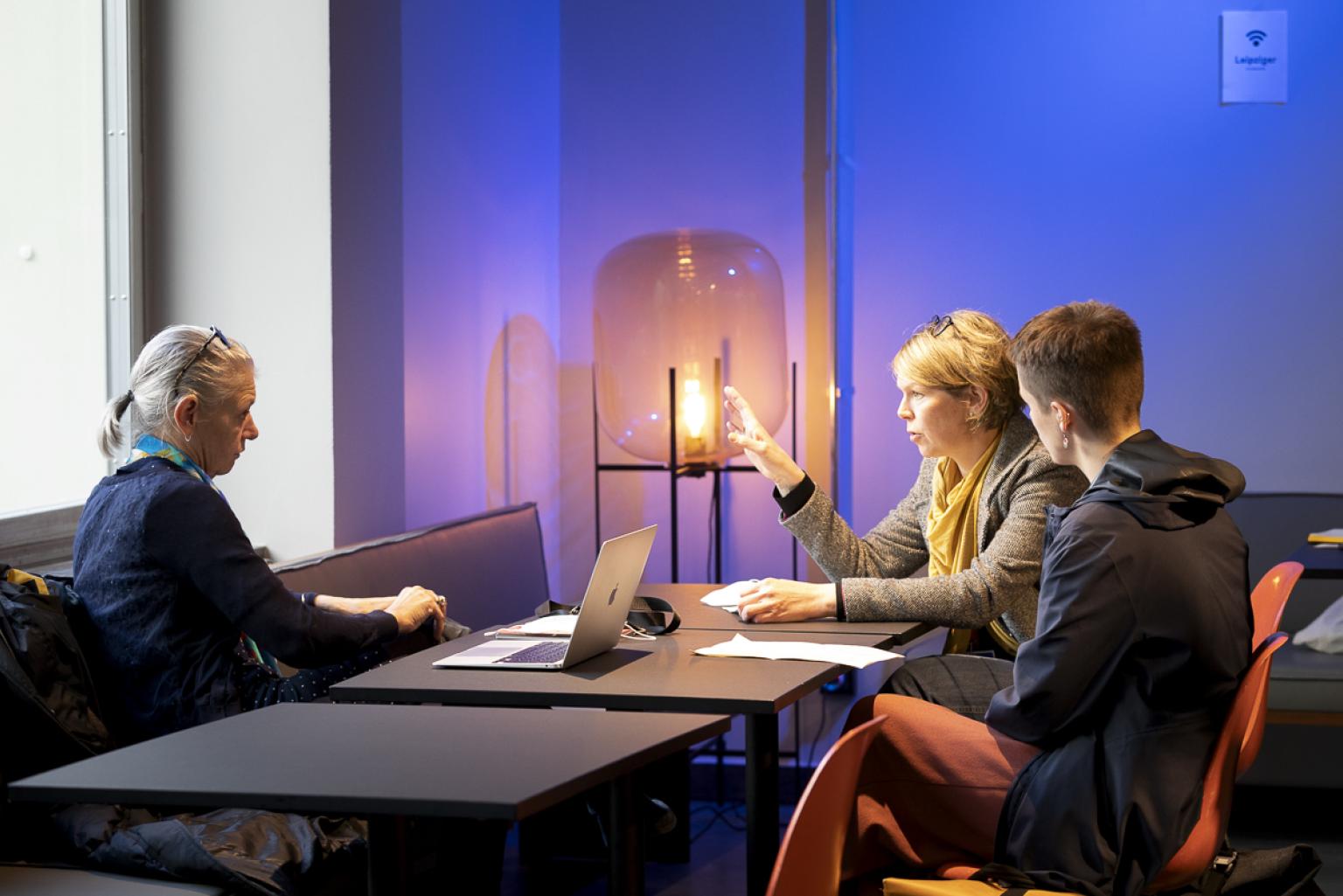 Our industry events take place in Leipzig during the first five days of the festival week (17 to 21 October) – along with livestreams and recordings for all those who can't be there on site. Following the festival week, professionals can additionally network online on October 24 and 25.

DOK Leipzig supports the Ukrainian film industry this year with an initiative created in cooperation with Docudays UA, the Ukrainian Institute and the Goethe-Institut. We offer filmmakers from Ukraine a platform to present their films, network with international industry representatives and forge partnerships that strengthen the future of the country’s talents. The DOK Industry Talk "One Day in Ukraine - A Case Study" presents a successful direct collaboration between Ukrainian producers and a leading European broadcaster.

Our DOK Industry Talk “Personal Storytelling from Underrepresented Communities” introduces the Re-Present Media initiative, which works to promote personal stories by filmmakers from underrepresented groups. In the talk, we build a bridge to European filmmakers of colour.

New this year: the DOK Archive Market. International archives will present their holdings and archive researchers and producers will offer consultations on researching and licensing film material. A programme of case studies and discussions offers insights into the nuts and bolts of archival work and explores the artistic process of archive driven documentaries. Among them: Netflix's true-crime production "Gladbeck: Das Geiseldrama", which exclusively uses original footage.

Festival Friday at DOK Industry is all about animation, including a DOK Talk, a master class by Špela Čadež and a panel by AG Animationsfilm. With "Animation Meets Doc", we provide a networking opportunity for documentary filmmakers and animation artists.

DOK Exchange will take place in hybrid form on 20 October. At the Conference, XR industry experts will give keynote speeches on topics such as agency, and the future of social VR. At the online Showcase, experts will advise six innovative XR projects in the development phase.

You can also look forward to the third season of our DOK Industry Podcast. It will be released during the festival week and focuses on representation and diversity in the documentary industry.

You can find all details on the DOK Industry programme including dates here: 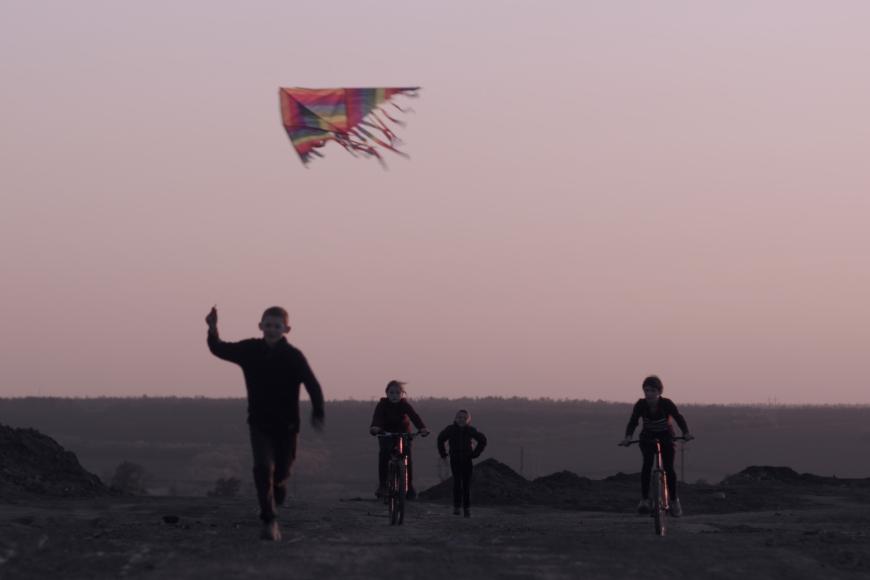 The DocuDays UA International Human Rights Documentary Film Festival could not be held in Kyiv this past March due to the Russian war of aggression against Ukraine. Therefore, in a show of solidarity, DOK Leipzig will be providing a venue for the 19th edition of that festival. 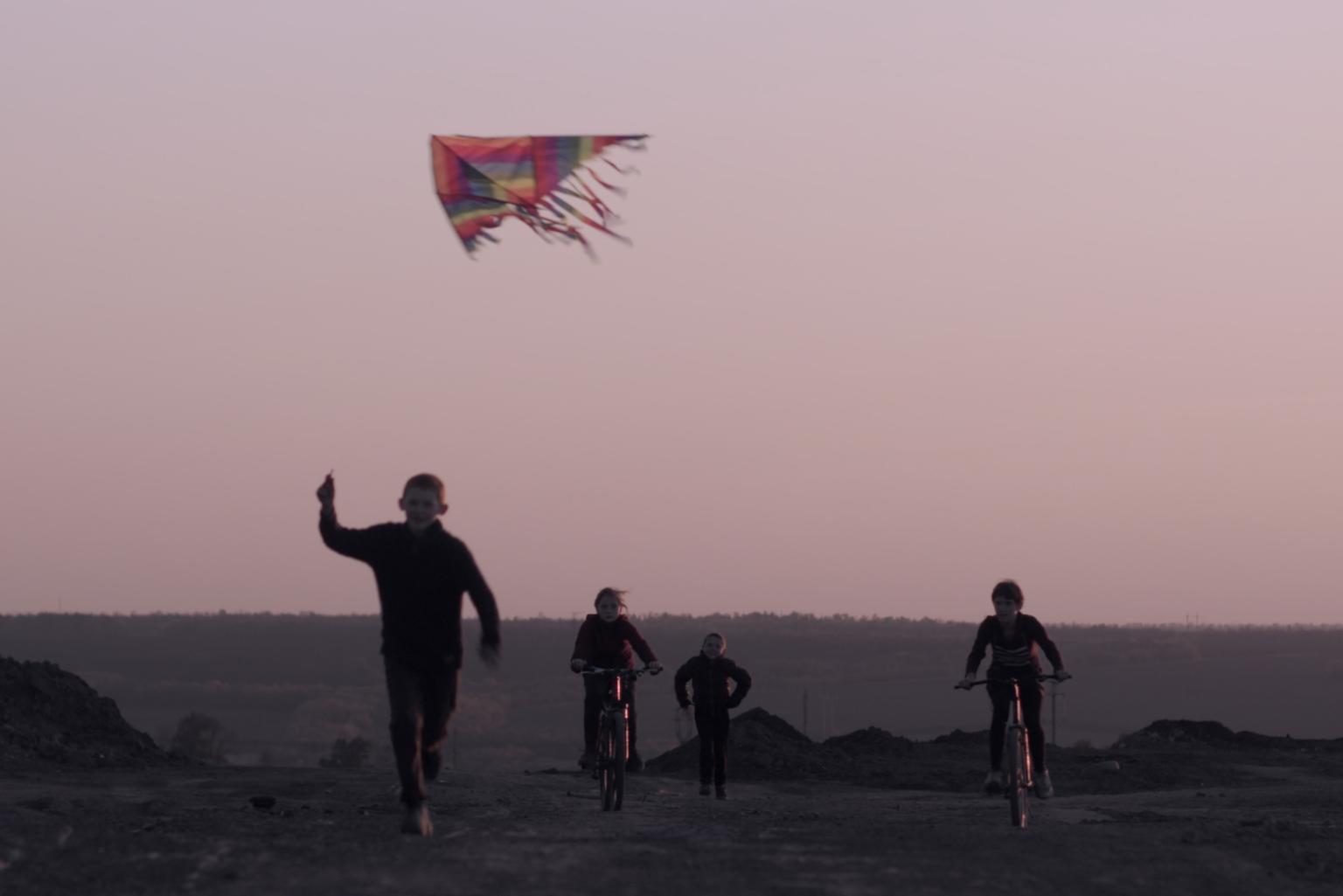 The Docudays UA International Human Rights Documentary Film Festival could not be held in Kyiv this past March due to the Russian war of aggression against Ukraine. Therefore, in a show of solidarity, DOK Leipzig will be providing a venue for the 19th edition of that festival.

A programme called “Spotlight on: Docudays UA 2022” will present the four films selected for the DOCU/UKRAINE national competition along with the opening film “Boney Piles” (image above). These works paint a nuanced portrait of the country, telling of property disputes in Kyiv and flea markets in Odesa, of first responders amid the pandemic in rural Transcarpathia, and also of the consequences of the war that has been going on in eastern Ukraine since 2014.

DOK Leipzig’s new “Panorama” section will open a window on the world of central and eastern European film, which is closely linked to the history of the festival. The works screened in this section will range from the socialist past through the period of upheaval to the present day. They’ll include works by established filmmakers, such as Latvian-born animation artist Signe Baumane, as well as by talented up-and-coming documentary filmmakers, such as as Otilia Babara from Moldova.

Many more films from central and eastern Europe will be showcased in the Doc Alliance Award selection, a competition held by the network of seven European documentary festivals, as well as in the new short film event “5x5 Shorts from the East”. In cooperation with film institution from the region, the short film programme will present 25 documentary and animated films at the Polish Institute on 22 October –free of charge for the public and to be seen on a “hop on, hop off” basis.

The already established “Camera Lucida” section will again be screening, out of competition, seven exceptional works by renowned documentary filmmakers, such as Heinz Emigholz, Narimane Mari and Éric Baudelaire. 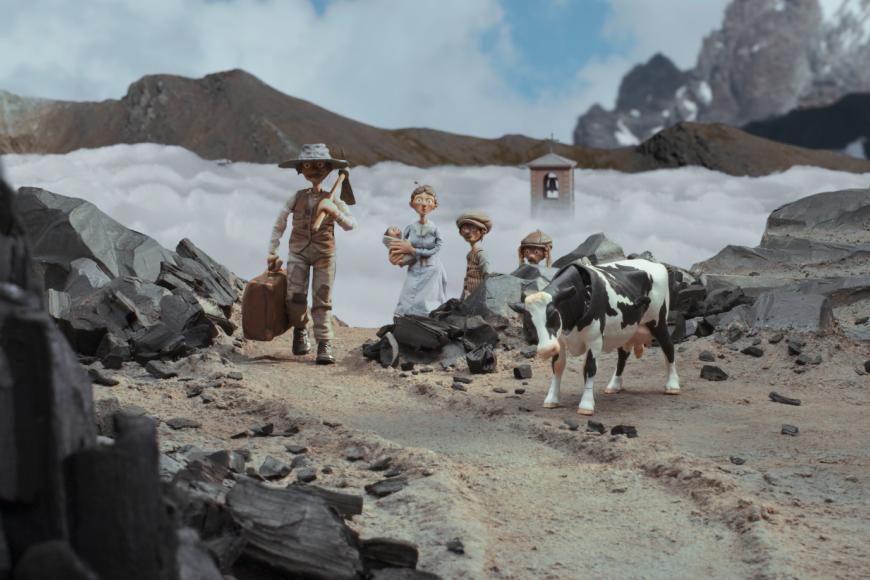 Animated film “No Dogs or Italians Allowed” opens the festival!

It’s only the second time in DOK Leipzig’s history that we are showing a long animated film to kick off the festival. In his stop-motion animation, Alain Ughetto traces the lives of his grandparents from Northern Italy to their migration to France in the first half of the 20th century. 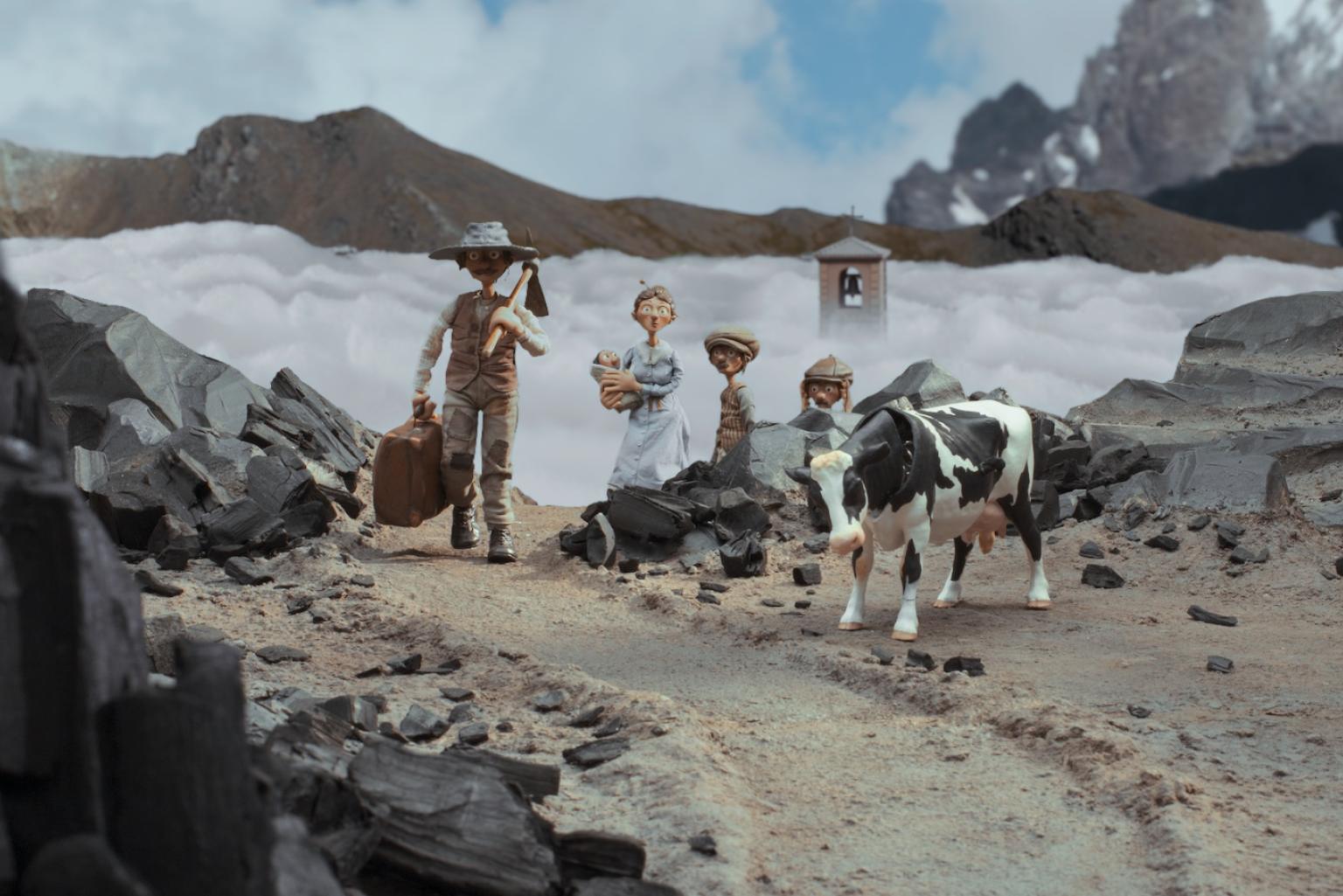 Animated film “No Dogs or Italians Allowed” opens the festival!

It’s only the second time in DOK Leipzig’s history that we are showing a long animated film to kick off the festival. In his stop-motion animation, French director and screenwriter Alain Ughetto traces the lives of his grandparents from Northern Italy to their migration to France in the first half of the 20th century.

In tragicomic style, “No Dogs or Italians Allowed” portrays the tough conditions in a Piedmontese mountain village. There, the men of the family have to take seasonal work in the French Alps or fight in colonial and world wars, while the women and children do the field work. When the fascists come to power in Italy, the Ughettos decide to emigrate to the neighbouring country.

“With this imaginatively directed puppet animation, Alain Ughetto has created a warm-hearted memorial to his Italian grandparents Cesira and Luigi,” says festival director Christoph Terhechte. Within the narrative, Ughetto stages himself in dialogue with his grandmother, who is portrayed as a puppet figure. He also humorously reveals the design of his cinematic world: landscapes out of materials such as clay, cardboard, cotton, and even chestnuts and broccoli.

As an animator and screenwriter for more than 40 years, Ughetto has made stop-motion animation and a do-it-yourself aesthetic his trademarks. After making several animated shorts, Ughetto's first feature film “Jasmine” (2013), a love story during the Islamic Revolution in Tehran, was nominated as Best Animated Film for the European Film Award. “No Dogs or Italians Allowed” celebrated its world premiere and received the Jury Award at the prestigious Annecy International Animation Film Festival.

The Leipzig public will get to know the director in person, when he attends the German premiere of his film. The opening ceremony of DOK Leipzig takes place on 17 October, 2022 at 7 pm at CineStar 8. The same evening, there will also be a free public showing of “No Dogs or Italians Allowed” at our pop up cinema at Leipzig Central Station.

Watch the Trailer (on Vimeo)

You don't want to miss our news and updates? Sign up to our newsletter!
The festival newsletter

65th DOK Leipzig Festival
Save the Date!
Add to calender
Inpage Navigation
Off