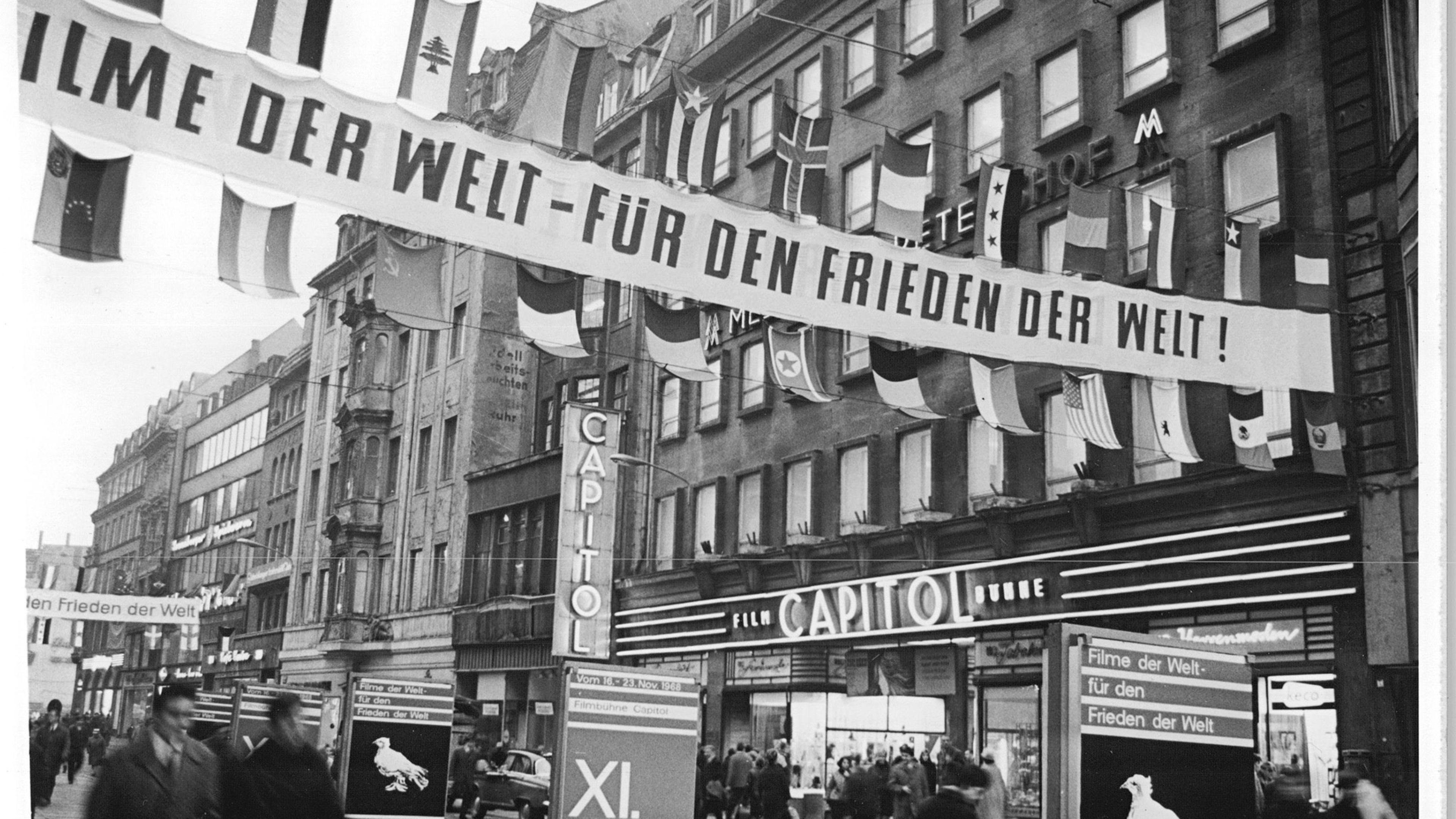 Unannounced screenings after midnight? Films smuggled over the border in a suitcase? Hotel rooms bugged by the Stasi? Legends about the Leipzig film festival abound. Many of them date back to the GDR days when the festival was still called “Internationale Leipziger Dokumentar- und Kurzfilmwoche für Kino und Fernsehen”.

And as always with stories that have been retold again and again over the years, it’s hard to tell where the truth lies. Impressions of the early days are entering oblivion. Take this famous photo from 1964 for example: 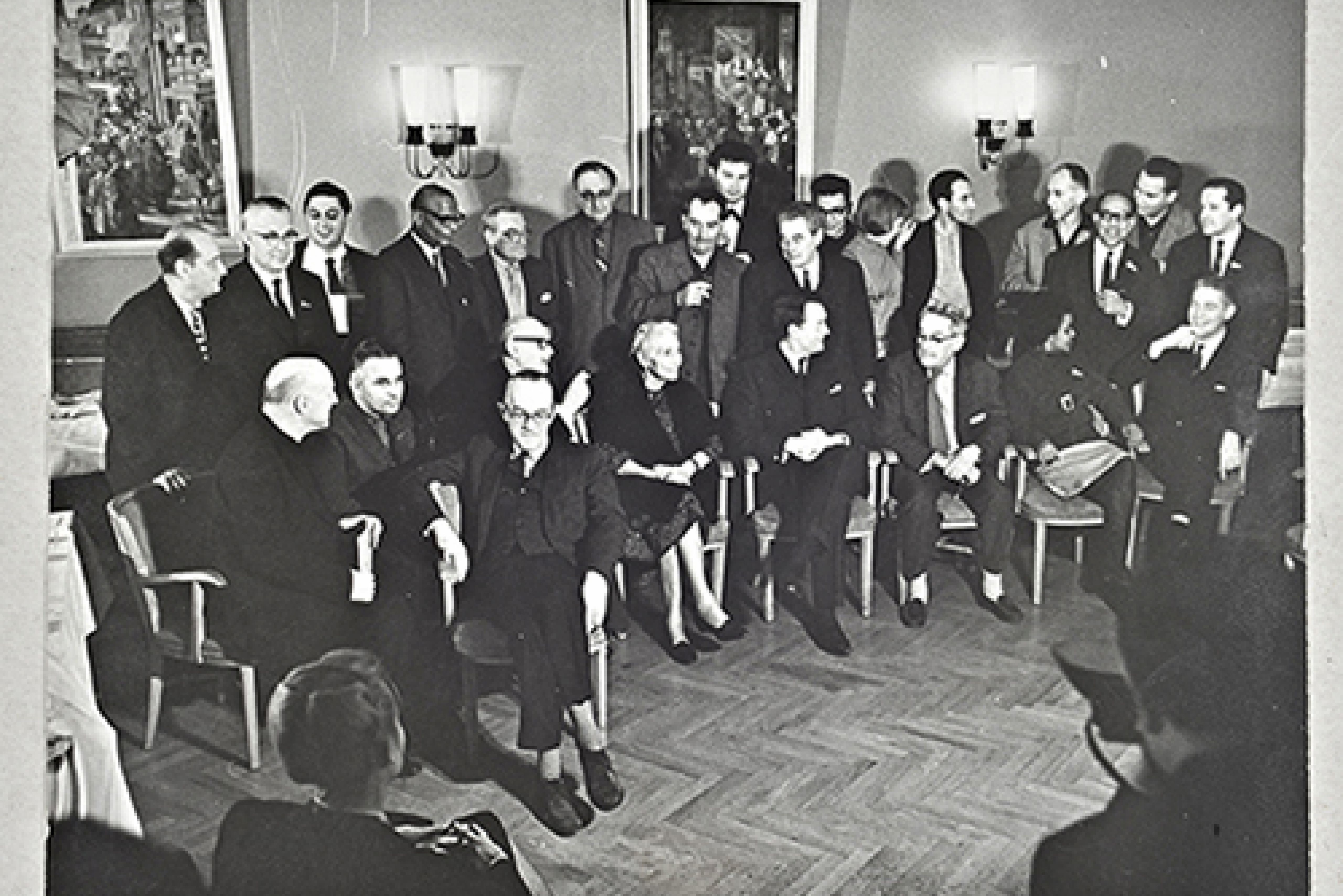 It features about two dozen directors. It looks like a class photo. But it’s not a photo of alumni reunited again after many years to chat about the good old days. This photo features some of the most famous documentary filmmakers in the world. It was a true event at this moment of the festival history and it proved that the festival had managed to build up an incredible reputation within just a few years.

After two rather unsuccessful attempts to set up a German “Kulturfilmwoche” (cultural film week) in 1955 and 1956 and a forced pause of three years, the festival had been revived with a new profile in 1960. It would henceforth be an international festival for politically engaged documentary and short films. At a time when the Cold War hampered cultural exchange between the East and the West, this concept was a political issue from the start, as of course the perceptions about the “right” way to act politically differed significantly on either side of the Iron Curtain.

It was not accidental that Leipzig was able to become one of the most important platforms for documentary in such a short time. After some initial reluctance, the GDR’s cultural authorities had decided to back the festival, and even tolerated its relatively liberal stance. After the erection of the Berlin Wall, the SED thought that the festival could send a positive image across the border – just like the annual Leipzig Trade Fair served to convince international guests of the young socialist state’s openness to the world.

Directors and their films were invited from all over the world to Leipzig, at great expense. Even new international film movements, such as France’s Cinéma Vérité, were represented in Leipzig. Joris Ivens’ The Seine Meets Paris (1960) and Chris Marker’s The Lovely Month of May (1963) were greeted with great enthusiasm, especially among young DEFA directors. As recent graduates from the film school in Babelsberg they were able to get in touch with international filmmakers in Leipzig. In 1962, none other than Pablo Picasso ennobled the festival by giving permission for his dove to be the festival’s emblem. This is how the festival’s slogan “Films of the world – For world peace!” was coined.

In 1971 the retrospektive has been dedicated to film director Roman Karmen, here arriving with Konrad Wolf (2.f.l.) at the festival cinema. Photo: Bundesarchiv, Bild 183-K1121-0006 / Friedrich Gahlbeck.
Ideological pressure on the rise

The picture of the “alumni meeting” of 1964 is evidence of the festival’s success. And yet it gives a deceptive impression of harmony. Behind the scenes, there was a huge debate about what political stance the festival should take, as is now clear from the files and documents. Some of the festival staff lost their jobs, even though they did not explicitly criticise socialism, but just spoke in favour of free speech. Dogmatic SED politicians applied pressure to the festival to ensure that it did not become even more liberal.

Though many of the films depicted class struggles, certain party representatives criticised that the festival did not promote the socialist worldview emphatically enough. It was also accused of “aspects of ideological co-existence” and chastised for neglecting the “necessary political and aesthetic debates”. The festival was accused of pandering to Western guests instead of celebrating the achievements of the Soviet Union and other socialist states.

The consequences soon manifested themselves. The selection committee was assigned to select films depicting sufficiently enough “the superiority of the socialist order” and explicitly revealing the “inhumanity of the imperialist aggressors”. There were to be no more free debates about how documentary films could influence artistic and political debate. The festival was forced to adopt a straighter and reliable ideological stance and at the same time the Stasi’s influence grew. GDR’s secret police fundamentally disliked the fact that the festival maintained numerous contacts with the West.

In the early days, there were just a few “unofficial collaborators” (IM) but by the end of the 1960s the tactic became one of skimming directly the festival management: the director had to file regular reports on how the preparations for the festival were going. A carbon copy of every visa application went to the Stasi. Secret police employees also attended the festival. Yet, considering the efforts to ensure the “festival’s safety” the investigational return was rather poor. The Stasi failed in its attempts to win over Western guests as informers. However, its presence was a constant one. This is clearly demonstrated by what happened in 1983. A group of 20 youths bearing lit candles demonstrated peacefully in front of the Capitol cinema on that year’s festival’s opening night. The demonstration was dispersed within minutes and many of the participants were detained for long periods of time. This is a sad low in the festival’s history.

For a long time, the festival could not broach subjects that did not match the “anti-imperialist” outlook. Thus, films about Poland’s Solidarność movement could not be shown in 1980 and 1981. But despite certain ideological shackles there was plenty of scope to show important films about subjects considered as controversial in the West, such as the Vietnam War or military dictatorship in Latin America. The festival also highlighted films from what was known at the time as the Third World. The retrospectives organised by the State Film Archive (of the GDR) around one particular director or country were excellent and unrivalled at other documentary festivals in the world.

The festival also managed to create spaces of freedom: for example, small screening booths could be rented at the Petershof for so-called trade shows that were of course more difficult to censor. The festival was also creative at camouflaging certain more controversial films in its programme, even if this meant screening them on Sundays at 8am.

For many film fans from Leipzig as well as for the East German specialist audience, the festival week was the most important time for gleaning impressions of the global film scene. These international films were rarely shown in regular cinemas or on television. Therefore, there was a tight competition for accreditations. And people were even willing to listen to long ideological speeches so as to watch certain films. On screen the supposed promises of socialism were often ridiculed anyway.

The occasional discordant notes present in certain DEFA documentaries and other East European productions, increased in 1987 and proved themselves as heralds of a political turn. The festival showed a couple of Soviet films in which social problems were explored, for instance the impact of Chernobyl, disillusioned youths, impoverished pensioners, or alcohol as a last resort from a miserable existence. And there was an omnipresent hope that something would finally change.

Glasnost and perestroika on screen

Glasnost and perestroika had found their way onto the German screen. The SED bureaucrats were so displeased that they did their best to prevent a repetition of the situation the following year but there was no way to stop the momentum. In 1988, Helke Misselwitz’s impressive documentary After Winter Comes Spring, an empathetic portrait of East German women and their individual desires, set the tone for change. And a year later, the festival already tried to renew itself in the midst of the turbulent upheavals of autumn 1989.

Susann Jehnichen
Restart in the 1990s

In retrospect, it might seem like a miracle that the festival was able to survive the difficult post-1990 era. Funding decreased, audience sizes shrunk and there was more competition from other festivals, too – all these could have spelled failure. One of the many reasons that the festival overcame them was the team’s commitment and conviction that the festival had a particular political and social relevance. Wasn’t this event as a cultural space for political and aesthetic activism and debate dealing with the vast changes in the world an absolute crucial thing – especially at this time?

Animation as a second pillar

In 1995, it was a stroke of luck that the festival introduced a competition for animated film and created a second pillar alongside documentary. Till today, the two genres provide the festival’s unique selling point. Many of the contacts that the festival established before 1989 remained. East European films continue to play a fundamental role in the festival. Another major change came about in 2004 when events for film professionals were introduced, ensuring the festival’s international significance.

Dealing with the festival past

Even if little remains of the original pre-1989 incarnation in today’s festival, an ongoing challenge is how to deal with the conflicting past. Attempts to look back at the GDR’s positive aspects without ignoring the festival’s dark sides have triggered much controversy. Emotions ran high in 2004 over the suggestion that Picasso’s dove should be replaced by a modernised version of it because the GDR had instrumentalised his work for political purposes. The festival director at the time, Claas Danielsen, was accused of gambling with the festival’s roots and traditions. Similarly, the 2012 discovery that Fred Gehler, who had an extremely distinguished record as the festival’s director from 1994 to 2004, was actually himself a Stasi IM during GDR-times, exposed how ambiguous the festival’s history has been. Although Gehler’s file spoke heavily against him, he refused to take part in any debate and stated that he had been falsely accused. Many questions remained unanswered.

In spite of all the changes that the festival has undergone over the years, it has never lost its unique character. The Q&As after screenings reflect the close relationship with audiences. The fact that box office figures have reached record highs in recent years is a sign that the festival remains a necessary platform for debate.

Challenges in society remain. Politically-engaged filmmakers who explore the world’s conflicts are as crucial today as they were 60 years ago. The festival in Leipzig with its critical audience ensures that the films do not lose their social relevance. Films alone are not able to solve problems but people who see them can. It’s not always easy to remain convinced of this, but what better task for a film festival than to reiterate this message?